THE BEGINNING OF NROTC AT UNC CHAPEL HILL 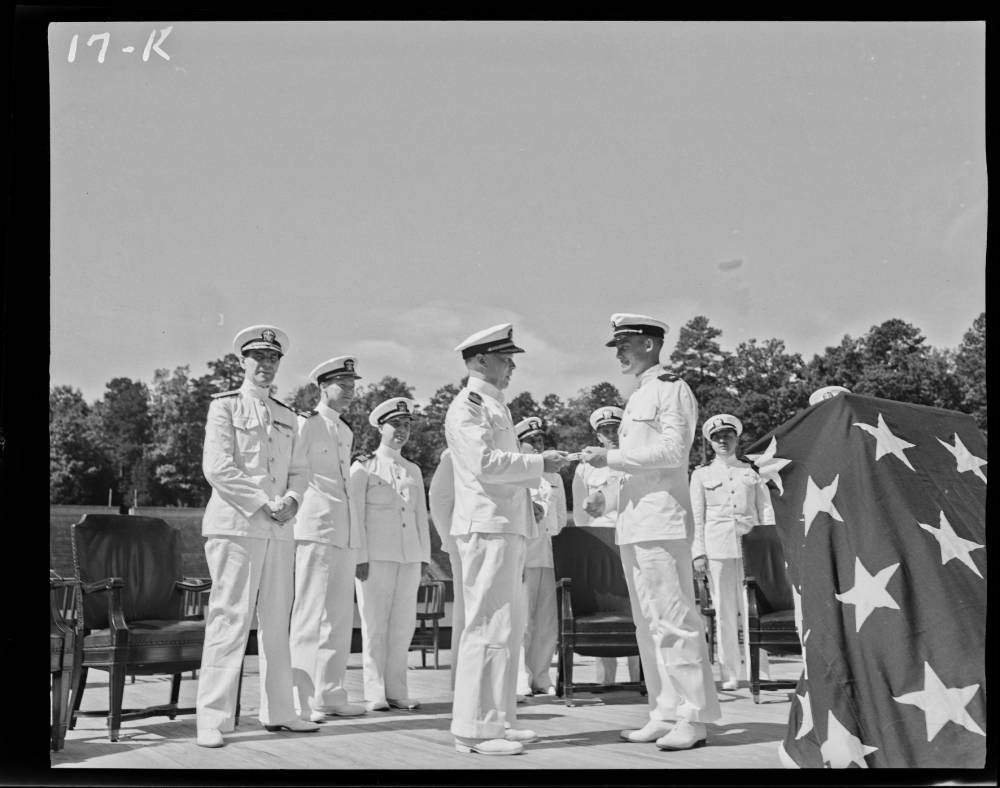 The Naval Reserve Officers Training Corps (NROTC) program was established in 1926 to offer the opportunity for young men to qualify for commissions in the United States Naval Reserve while attending college. Later the NROTC was revised to offer students the opportunity to graduate with a bachelor’s degree and a commission as either a Navy Ensign or a Marine Corps Second Lieutenant.

During the summer of 1940, the efforts of The University of North Carolina President Frank Porter Graham led to the authorization for establishing an NROTC Unit at UNC. On September 12, 1940 the NROTC Unit was in operation, with Captain Robert S. Haggart, USN as Commanding Officer. 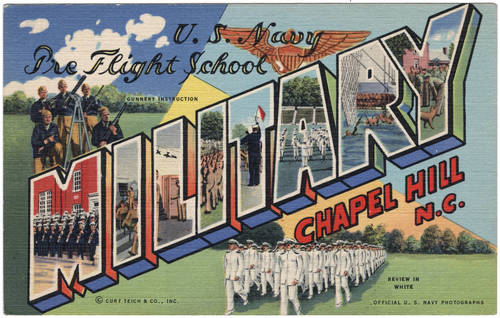 In 1941, the threat of war nearly tripled the NROTC enrollment, as 188 midshipmen began intensive military training. When the naval midshipmen drilled on Emerson Field, they were equipped with “new” Springfield rifles, blue and gold Annapolis uniforms, sabers, and regulation .45 caliber service revolvers for their midshipmen officers. NROTC classes were held in Woolen Gym and included such topics as Astronomical Mathematics, Navigation, Boat craft, Signaling, and Regulations.

In May of 1943, the Navy Department established a pre-flight school at Carolina, and in July of the same year, a V-12 program was established. In response to the need for classrooms, housing, and dining facilities for 1,874 pre-flight midshipmen and up to 1,330 V-12 trainees, the Navy built the Naval Armory, Navy Hall (which served as Headquarters and is now the office of Undergraduate Admissions), Navy Hospital (now the Student Health Service), and Kessing Pool, where Navy anchors are still present on the tile decks.

Women first enrolled in the NROTC in 1974. Another milestone in the history of the unit occurred in 1979 with the creation of a cross-town enrollment program at North Carolina State University. Thus, The University of North Carolina’s renowned Liberal Arts programs were complemented by NCSU’s outstanding engineering programs. The expansion of the program has attracted many scholarship winners and has served to boost the unit’s total enrollment. In October 1992, the NROTC Units of UNC, NCSU, and Duke University were combined to form the NROTC Unit, North Carolina Piedmont Region.

The midshipmen of UNC continue to embrace the rich traditions established by the previous generations of Tar Heels and continue to improve upon them in order to prepare for the numerous challeneges that await them in the Navy and Marine Corps when they graduate.

For More Information on the History of UNC and its military involvement, visit this link.

Also, be sure to check out our Anchors Aweigh newsletters for an insight into the lives of Midshipmen in more recent years.